The Infosec Prep Discord server had recently announced an OSCP voucher giveaway except they only allowed people to enter in the giveaway pool by submitting the flag of this challenge, which I personally feel was a much better approach than before - …clicking emojis to enter.

This machine was created by FalconSpy and was uploaded on VulnHub and can be found here. It is like any other Boot2Root type machine and is very easy. By creating this requirement it is ensured that at least only those will be selected who are ready to get into the PwK course and not someone who still hasn’t grasped the basics yet.

I have written this writeup for absolute beginners, with no assumptions in consideration. If you feel like you didn’t understand something feel free to contact me.

To start you download the VM, unzip it, and double-click the extracted file.
The VM starts with the network adapter connected via “Bridged” mode, which means it is directly connected to your network (maybe WiFi) like any other device. Connecting a vulnerable machine directly to the network is not such a good idea, and we can do something better to keep our network secure. We will change that setting and ensure it is connected and accessible only via our host machine by switching the network adapter to “Host-only”.

Select “Host-only”, and then OK to save the changes.

In order for us to use our attacking machine, Kali in my case, to hack this vulnerable machine, we need to ensure that both these machines are in the same network. So we will change Kalis’ network adapter to “Host-only” as well. Perform the same steps as above for the Kali machine or whichever OS you’re using to tackle this challenge.

Once the adapters have been changed the IP addresses of both the machines would have changed. Let’s find out what these new IP addresses are.

On our attacking machine, we will enter the following command in the terminal 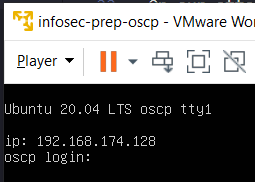 But what if that wasn’t provided, how could you get the IP then? Well, since we know the network in which this machine resides, which is same as our attacking machine - 192.168.174.0/24, we could use nmap to get the IP address of the target machine. Another tool you can use is - netdiscover, you should always mess around with different tools and identify which works better when or which one you feel more comfortable with while also getting the job done.

Before starting with any machine it’s important that you create a separate directory for that machine, and save all the output in that directory. I usually create (check my mkdir alias here) a parent directory with the machine name, and then three child directories to save files in their relevant folders.

We will perform a ping sweep on our network to get the targets’ IP address.

Now that we have its’ IP address, we will scan the machine to see which ports and their respective services are active.

Great our first nmap scan is here pretty quickly with the results. It is important to note that when not specifying ports to scan, Nmap automatically takes the “top 1000 ports” and scans a target for these ports. By top 1000 ports, I do not mean ports 1 to 1000, but rather most frequent ports that Nmap has come across so far since its’ inception.

From the output, we can see that there are only two ports open on this machine:

Let’s take some mental notes!
Since port 22 is open, this machine is most likely a Linux machine because SSH is a very common service that is active on Linux based hosts unlike Windows. You would have probably known that the target is based on Linux by reading the description of the machine on VulnHub or maybe just by looking at the login screen, but we’ll always tackle a machine assuming we have no prior knowledge about the target other than its’ IP, if at all.

Since port 80 is open, the machine must have some kinda of web server running and a website too.

Let’s scan these two ports by using Nmaps’ scripts, to get more information about them.

Great, we got a lot of information back. Let’s again make some notes.

I listed all the information we got in a tabular format to view and refer from better. Before we start interpreting these results, let’s have an all port scan run in the background as it could take some time to finish.

Now let us get back to the results of the initial targeted scan.

From the SSH and HTTP version we got from Nmap, we can say that this is an Ubuntu machine and we can also find out which one, which I’ll show in the SSH enumeration section.

We can also look up these versions to see if there exists any publicly known exlpoits for their respective services.

We know that a web application is used here, WordPress, to make a website.

We also found a hidden file called secret.txt which was in the “Disallow” list in the robots.txt.
Server header being default isn’t of much use here.

The title of the first page captured is not default, indicating that we may not have to look for hidden content.

Although we were able to get the version of the SSH doing an Nmap scan, you could achieve the same manually as well and learning and knowing how to achieve objectives manually is a crucial skill.

The process of getting the version and some basic information from a service is called Banner Grabbing, in which you connect to a service as any other normal user and let it show you some basic information which often includes version.
Sometimes on corporate services, upon connection, it shows which firm owns that service and that unauthorized access is not allowed. This image can be taken as a example.

We can use telnet to get the SSH version

We can also use nc to achieve the same

We were successfully able to get the version manually using two different commands.

Let’s get the OS running from this SSH version. Since the attacking machine is connected host-only, I will do this on my host machine.

We’ll search for “ubuntu openssh launchpad” on Google, and the very first link was exactly what we wanted, all the openssh versions to their respective Ubuntu versions. If you don’t know what launchpad is, it is a collaborative platform which keeps track of all the Ubuntu packages and bugs and much more. 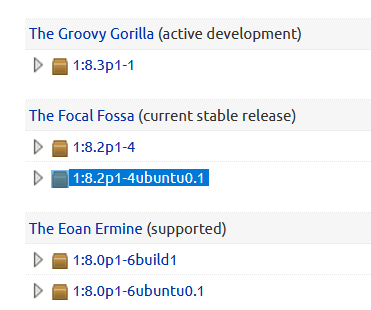 It shows that this version of OpenSSH is in Ubuntu Focal Fossa. Another quick Google search shows that “Ubuntu Focal Fossa” is Ubuntu 20.04 LTS. There probably isn’t any public exploits available for this machine as it is quite recent, but if the OS you find turns out to be a little old then you could probably search for exploits against it too.

Let’s move to enumerating the web manually, starting with finding the server version in a few ways.

First we’ll use curl to find the version of the web server.

Another way of finding the server version is by browsing to a non-existent page via a web browser.

And we got the web server version.

Before we go any further, let’s take a look at the all port scan and see if any new ports were found.

Looks like there’s an additional port found - 33060 mysqlx. Since this is a MySQL port, we won’t really look into this.

In our initial targeted Nmap scan, we found that in robots.txt there’s an entry in the “Disallow” list - secret.txt.
Let’s take a look at it. 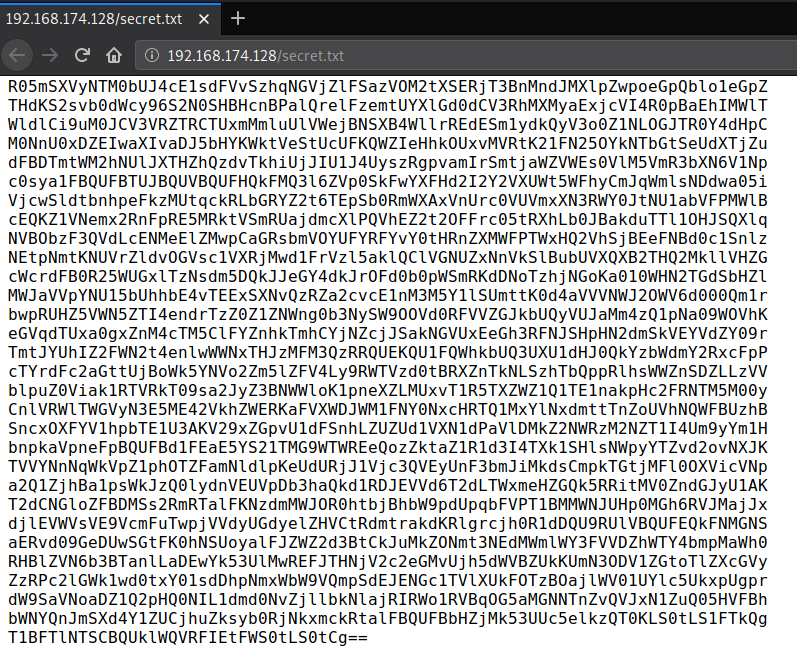 It looks like it is a base64 encoded string, we can say that because the string is ending with two equal signs. Let’s copy its’ contents (or you can download the file using wget) and decode it.

And the secret is out. The encoded string is nothing but a SSH private key. The key must belong to some user, so let us hunt for one.

Note: When decoding a file, its’ contents must be copied and pasted exactly as it is. No additional character or new line must be present in the pasted file. This is to ensure the decoding is done exactly as intended

Let’s take a look at the website, as there might be some information there, intentional or otherwise.

Upon browsing the index, the post gave us the user that is on the machine - oscp.

Let’s make the private SSH key suitable to use, by ensuring the key is not writable by any other person. To do so we change the permissions of the file using chmod command and setting permissions to 600.

I also renamed the file appropriately as per its’ purpose. Now we are ready to use this key to login as “oscp.” 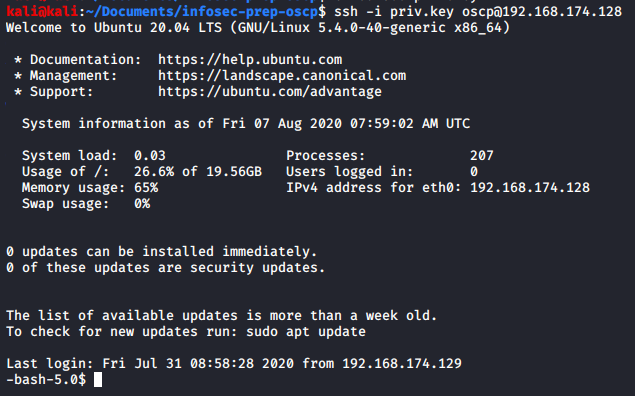 We will use LinPeas to enumerate the system.

We will transfer the script to the target machine. To do so, we will host the script on our machine using python server, pysrv as a command does not exist, the term is an alias, you can check my aliases here) and download it on the target using wget.

Once the script is transferred, we make the script executable using the following command:

Once the script is executable, we run it. LinPeas is a nice tool which highlights binaries if it knows the binary is vulnerable or exploitable for sure.

Once executed, it will start dumping all the information out on the screen, while going through it you will see that the bash binary is highlighted in the “SUID” section.

Great, it looks like we have the privilege escalation binary on hand.

If you wanted to find this binary manually you could run the following command to get all the SUID binaries, and then compare those binaries against your system to find any non-standard binary or binaries that shouldn’t ideally have SUID enabled.

Although we know which binary to target, we do not know how. Luckily for us, there happen to exist a collaborative project called GTFOBins which keeps track of all such binaries which could be exploited in several ways.

We can search for “bash” in that website, and select the functionality, SUID, which we have access to.

The first command is to make bash a SUID binary, but we already have one so we’ll ignore that.
All we have to do is execute our SUID binary as - /usr/bin/bash -p to get root.

Let’s go get our loot

Apart from this method, there turned out to be two more ways that one could have taken to become root. FalconSpy has written about both the unintended methods here

If you did not get something, or found some mistake, feel free to contact me.
Take care, and keep hacking!